Eighty 5th grade pupils from Campo Arañuelo School in Navalmoral de la Mata visited the Royal Monastery of Yuste, which is also de headquarters of the European and Ibero-American Academy of Yuste Foundation.

This visit is framed within the project “The European Union: a History of Values and Human Rights”, which started off last year. Its main aim is to awaken the interest of students to know the meaning of feeling European; to promote respect for human rights, and to get acquainted with the European value and heritage.

Students and teachers visited the Palace of Emperor Charles V in order to see the last retreat of the last emperor; they were told anecdotes of the monarch and some details about the architectural and patrimonial heritage. The students then visited the premises of the Foundation in order to attend the talk given by Miguel Ángel Martín, delegate of European Affairs of the European and Ibero-American Academy of Yuste Foundation in Brussels. During the talk, students received information on how important it is to be part of the European Union, the work carried out by European institutions and how decisions taken in Europe may affect the citizens’ everyday life. 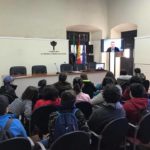 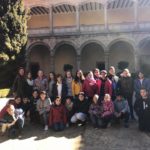