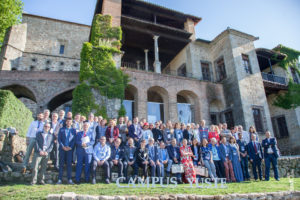 The Chair of the Enlarged Partial Agreement on Cultural Routes of the Council of Europe, Marianne Berger Marjanovic, stated that events such as the 7th Training Academy are the best way to highlight the existing good practices and how they may be transferred to other regions and be developed. This is all with the aim to “provide a dynamising framework that will allow the initiation of new routes in a European context characterised by education and cooperation”.

The Head of Democratic Initiatives Department of the Council of Europe, Eladio Fernández Galiano, considers that the cultural routes are among the “best dynamising elements of the European regions”. A Europe that, in his opinion, “has an opportunity to honour its heritage and values, reaffirming its engagement in favour of human rights and cooperation”, which is why he affirmed that, “the cultural routes make more sense than ever as the vertebrating element of rights and values that characterise us as Europeans”.

The President of the Assembly of Extremadura, Blanca Martín Delgado, highlighted the figure of Charles V as the “unifying heart of European identity” and of women, such as Isabella the Catholic “whose prominence determined Spanish history”. Furthermore, as is the case of the rest of participants, she asked Europe “not to turn its back on what is happening on the other side of the Mediterranean, since this is the time to assert the values that characterise us as Europeans”, she affirmed.

The Deputy of Culture of the Province Council of Cáceres, Álvaro Cotrina, underlined the worrying aspect of depopulation in his speech, which affects many interior parts of Europe. In his opinion “it is the job of business people, social structures and politicians of each region to initiate the measures to stop this depopulation”. In this sense, he explained that the Province Council of Cáceres has started a tourist programme in the region of La Vera called “Carlos V, retiro imperial” (“Charles V, Imperial Retreat”) in order to enliven the area from a touristic point of view.

The Vice President of the European Routes of Charles V, Fermín Encabo, has underlined the virtues of the region of La Vera “a land that has much to offer and has yet to be discovered which is why initiatives, such as the cultural routes, are a good manner to achieve this purpose”.

The Mayor of Cuacos de Yuste, José María Hernández, also highlighted “the importance of the cultural routes as dialogue boosters among European towns and a way to highlight their cultural identity.” The Delegate of National Heritage in Yuste, Ignacio Muñoz Llinás, highlighted the role played by the monastery “as a unifying heart in the history of Extremadura, Spain and Europe throughout the centuries since its creation in 1408”.

The 7th Training Academy gathers together more than 70 European representative experts from more than 32 certified routes by the council of Europe; 10 candidate routes that attempt to be certified, as well as other cultural routes from different European geographical points in order to debate on new tendencies in cultural routes within a reinterpretation of the European cultural heritage. The attendees will analyse how to give the European cultural routes more value; how the use of technologies may dynamise the activity of the routes; how to take advantage of the potential of social networks and the importance of establishing alliances in order to draw more benefit from the cultural routes.