Warning: count(): Parameter must be an array or an object that implements Countable in /var/www/vhost/fundacionyuste.org/home/html/wp-content/themes/YusteCexeci_V1/includes/template-tags.php on line 54

Warning: count(): Parameter must be an array or an object that implements Countable in /var/www/vhost/fundacionyuste.org/home/html/wp-content/themes/YusteCexeci_V1/includes/template-tags.php on line 54 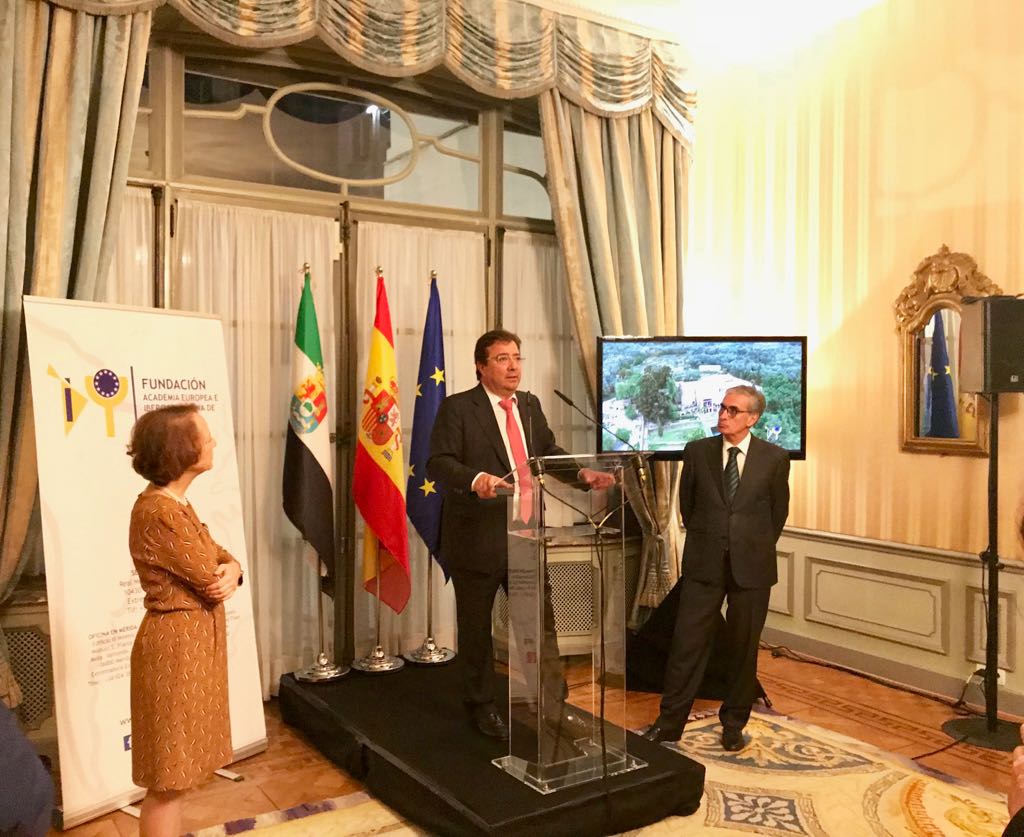 The President of Extremadura Regional Government, Guillermo Fernández Vara, today introduced the European and Ibero-American Academy of Yuste Foundation (FAEIY) in Brussels, at the residence of Cecilia Yuste, Spanish Ambassador in Belgium, who hosted the ceremony.

Fernando Vara said that the main aim of the new Foundation is to contribute to the promotion and consolidation of existing links between Extremadura, Europe, and Ibero-America, following principles of loyalty, respect for each one’s identity, mutual benefit, and solidarity. He also reiterated that the Carlos V European Award would continue to be one of the distinguishing features of the foundation, giving recognition to the work of individuals, organisations, projects, and initiatives promoting the process of European construction and integration, to be presented each year on 9 May, Europe Day, at the Royal Monastery of Yuste, presided over by His Majesty the King of Spain.
It should be noted that the Extremaduran Statute of Autonomy refers to its link with Ibero-America as one of the region’s distinguishing features, and also dedicates particular attention to it belonging in the European Union. With that in mind, its American and European roots and traditions puts Extremadura in a privileged position to deepen links and integration between Europe and Extremadura.

In this context, FAEIY, set up through the merger between the European Academy of Yuste Foundation (FAEY) and the Extremaduran Centre for Study and Cooperation with Ibero-America (CEXECI), has been conceived with the aim of using its background and experience accumulated over 25 years to become the main tool for the region in terms of building a relationship between both geographical regions from a perspective of civil society.

“In the turbulent times we find ourselves in on both sides of the Atlantic, more than ever society needs reference points that brighten a horizon filled with uncertainty and major challenges, as well as opportunities and new projects to work on”, added the Head of the Extremaduran Executive.

Also participating in the ceremony were President of the European Parliament’s Delegation at the Euro-Latin American Parliamentary Assembly, Ramón Jáuregui, and it was also attended by, among other institutional representatives, a number of MEPs, and the Ambassadors of Bolivia, Guatemala, Paraguay, Argentina, Peru, Honduras, Uruguay, and Nicaragua, as well as Pablo García-Berdoy, Spain’s Permanent Representative to the EU.


Warning: count(): Parameter must be an array or an object that implements Countable in /var/www/vhost/fundacionyuste.org/home/html/wp-content/themes/YusteCexeci_V1/includes/template-tags.php on line 54