Felipe González Márquez received the Carlos V European Award on 9 October 2000 at a ceremony presided over by Their Royal Majesties, the King and Queen of Spain at the Royal Monastery of Yuste. The jury highlighted the fact that “the incorporation of Spain into the European Economic Community on 1 January 1986 after twenty years of waiting meant the legitimisation of Spain’s place within Europ e, the definitive consolidation of democracy and the overcoming of an age-old separation from Europe”. 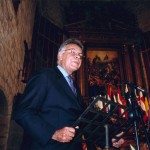