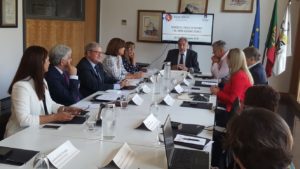 Among the subjects dealt with is the redesign and impulse of the Ibero-American Virtual Magazine of Social Sciences, REVIBE, produced by Yuste Foundation, in order for it to become a modern digital academic platform of the 21st century. REVIBE intends to create its own scientific space for Ibero-American cultural and educational identity. To this end, its contents are based on the opening of new perspectives and interdisciplinary research areas that may strengthen new visions as far as the American world is concerned. The management team, furthermore, intends to work and boost its presence on the net and social media.

This is how the changes carried out have, thus, been presented in CAVILA’s website as well as the progress of the book of AULA-CAVILA’s tenth anniversary.

AULA’s main initiative is the Latin American Virtual Campus, CAVILA, whose aim is the promotion of teaching, research and Latin American identity through cultural extension (www.cavila.org).

CAVILA, which formally began its activities in 2008, has gradually become the campus of a great power, allowing not only a shared academic programme, but also mutual support as far as transfer of new information and communication technologies, the power of sharing virtual libraries, creating research networks or student mobility programmes among the public universities it is composed by is concerned.

The different universities it is composed by offer higher education, degrees and courses, graduate and postgraduate subjects in this virtual space and they work in research networks. The potential beneficiaries of the Latin American Virtual Campus may be close to 839.300 students and around 74.200 teachers/ researchers.