On 12 September 2012, José Manuel Durão Barroso, the President of the European Commission, in a speech to the European Parliament on the state of the European Union, made a call for the creation of a federation of nation-states in Europe, but not as a super-state, but rather as a democratic federation sharing sovereignty so that citizens could exert greater control. In this regard, the need to drive the European process forward has been displayed in the wake of the great economic and institutional crisis and the questioning of political credibility which has plagued Europe since 2007, with a call for its citizens and representative institutions to seek reliable and solid solutions to ensure the process of European construction and integration and dispel the many doubts existing with regard to its viability. In recent years, as a result of the crisis, we have seen the beginnings of the creation of a system of mutual support between the member states and the federalist model is even being suggested as a solution to the separatist and pro-independence tendencies in some regions. It is therefore essential to discuss and analyse these possibilities in order to involve different actors in the process so that they can help us to clarify the way forward for the process of European integration.

This summer course includes workshops for personal and professional training of participants, aiming at enlarging knowledge and capacities in: oratory and negotiation, excellence team building, and communication and social networks to the development of personal image.

The working language of the summer courses is Spanish. Interpretation will not be available. 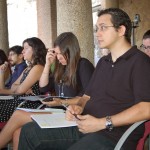