Jorge Fernando Branco de Sampaio received the Carlos V European Award on 13 October 2004 at a ceremony presided over by Their Royal Majesties, the King and Queen of Spain at the Royal Monastery of Yuste. The jury presented the award “for his meritorious public service in favour of general understanding, the struggle for humanitarian values, the enhancement of the historical and cultural values of Europe, his work with the European Council’s European Commission on Human Rights and for his contribution to unifying European cities, from the south-western Iberian Peninsula”. 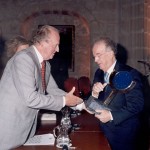