Wilfried Martens received the Carlos V European Award on 25th June 1998 at a ceremony presided over by Her Royal Highness, Princess Cristina at the Royal Monastery of Yuste. The jury presented the award to Wilfried Martens “as recognition for his work in the European Parliament during a difficult period in European construction marked by the economic crisis and doubts regarding progress in integration processes, as well as for his political commitment to the idea of Europe within the process of European Union construction”. 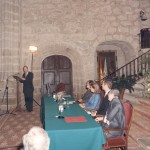