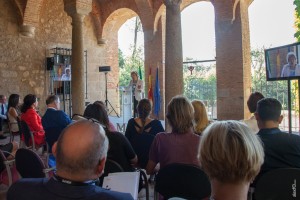 Italian professor Sofia Corradi, Mamma Erasmus, winner of the Carlos V European Award, gave the opening speech at the doctoral seminar entitled ‘Peace and European Values as a potential model for integration and progress in a global world’ held at the Royal Monastery of Yuste from Monday 24 until Wednesday 26 July, as part of the Campus Yuste academic programme.

The seminar brings together the ten researchers selected to receive a research and mobility grant in European studies to present their work to other researchers and professors. The work will subsequently be published by the Foundation in the ‘Cuadernos de Yuste’ (Yuste Notebooks) collection. The researchers will go on to join the European Yuste Alumni network, now made up of some 80 people from all corners of the world, in many cases in important posts at European institutions.

Taking part in the opening were Chief Executive of External Action and President of the Foundation’s Executive Committee, Rosa Balas; Vice-Chancellor of Quality at the University of Extremadura, Juan Carlos Preciado; Lucia Barbato, Head of the Academic Office at the Italian Embassy in Spain; Jürgen Elvert (Jean Monnet Lecturer in European History at the University of Cologne (Germany) and Seminar Director; and José María Hernández, Mayor of Cuacos de Yuste. The seminar also had collaboration from the Extremadura Development Cooperation Agency and the Government of Italy – the award winner’s home country.

During the opening ceremony, the President of the Executive Committee of the European Academy of Yuste Foundation handed over the Gran Cruz de la Orden Civil de Alfonso X el Sabio (Grand Cross of the Order of Alfonso X, Alfonso the Wise) that she collected in Sofia Corradi’s name on 27 February. The award is granted by the Ministry of Education, Culture, and Sport to individuals, legal bodies, and other entities from Spain or overseas for their outstanding achievements in the fields of education, science, culture, teaching, and research, or for providing outstanding services in those fields in Spain or internationally.

During her speech, the Chief Executive reiterated how the new European and Ibero-American Academy of Yuste Foundation aims to unify the “double vision of Europe and America that Extremadura has”, alluding to a phrase uttered by MEP Elena Valenciano at a course held last week on the integration of the European Union and Latin America, saying how thanks to the Erasmus programme young people would no longer see themselves in wars”. For Balas, this phrase sums up “the spirit of the best 60 years of Europe and our history”.

Balas explained how since the beginnings of the Erasmus programme in 1987, almost five million students have travelled to another country. It also has an indirect effect on their families: once they know the destination country their interest in all that happens there grows, which ends up leading to “a greater and better understanding of Europe”.

Rosa Balas recalled how Sofia Corradi had told her of her desire for the Erasmus programme to be as prominent in Latin America as it is in Europe, asking her to utilise the figure of Carlos V, through the Foundation, to encourage this union to take shape. “From Extremadura we are contributing to this integration through the America Campus programme, giving 120 grants to encourage exchanges between students at the University of Extremadura and Latin America”, she explained.

Lucia Barbato, Head of the Academic Office at the Italian Embassy in Spain, highlighted the Foundation’s work to give recognition to the values of the Old Continent through “culture, training, and research”, demonstrating its “effective commitment to the essence of humanist ideals of western civilisation”. The process of European integration “owes a lot to the transnational mobility of European students – made possible and strengthened by Mamma Erasmus’ fruitful project. In her opinion, Erasmus students and professors in Italy and Spain constitute “a surprising network of relationships, an impressive force in bilateral actions for cooperation between the two countries, on the path towards the constitution of a more and more united Europe”.

Lucía Barbato gave a heartfelt tribute to the Erasmus students who were victims of the terrible accident in Tarragona on 21 March 2016, especially the seven Italian students. To pay tribute to them the Italian Ministry for Education, University, and Research together with the University decided to dedicate seven doctoral grants in memory of the tragedy, to “look to the future of our young people and our world because our commitment is to keep building a better Europe and a better world”.

Lastly, Italian professor Sofia Corradi – Mamma Erasmus, Carlos V European Award holder, gave the inaugural speech of the doctoral seminar saying how since the start of the Erasmus programme, “five million students from some five thousand European higher educational institutions” had benefited from the project: this year some 300,000 students are taking part.

For Sofia Corradi, Erasmus is not all about learning or achieving mastery in foreign languages, nor is it just for outstanding students, and “more than a privilege for the few, it is an opportunity for the many” because it is not focused on academic excellence. “An engineering student who joins the Erasmus programme does not become a better engineer, they become a better person”, she said.

The truly important thing about Erasmus is not studying abroad, but “the experience of total immersion in a different culture; of being immersed in a different way of life, direct, personal interactions in day-to-day experiences with people of the same age and educational level, confronting the same practical issues of university life but in another country”. What we now call the “Erasmus effect” comes directly from the immersive experience, without the use of theoretical paradigms. Simply put, students learn by living.

The winner of the Carlos V European Award and founder of the Erasmus programme confirmed that through experiencing the Erasmus programme the biggest goals are achieved in the terms of personal growth, the acquisition of leadership qualities, wisdom, and creativity. Erasmus creates a dialogic mindset that becomes a general and permanent feature for the individual, influencing all future relationships the individual will have when they meet new people. “I think we have the moral duty to carefully consider what better use we can make of these resources for the benefit of our global human family”.