2019 marks the 80th anniversary of the end of the Spanish Civil War, which caused thousands of people, men, women and children, to flee the country to save their lives. Their destinations were Europe, where World War II began, which caught many unprepared and were welcomed in unfavourable conditions, and on the other hand Latin America where they were received in Mexico, Argentina, Chile, Venezuela, Santo Domingo, or Puerto Rico. This movement is known as the Spanish Exile and we remember this at a time when we are living in Europe, on the other side of the coin, receiving refugees and political exiles who arrive at our borders asking for help and fleeing the bloody and endless wars that plague their countries, a few kilometres away from a Europe that is reborn from its ashes and is now a symbol of Peace and Prosperity.

It seems that memory fails us and we easily forget our past and what our ancestors went through, to confront the present. That is why we have decided to organise this course based on the specific case of Spanish Exile in Mexico as an example of a country that knew how to receive and welcome with open arms all those Spaniards who fled the war and who in the medium and long term became a reference for the struggle for freedom, peace and democracy. Two countries that were once again united by history during one of the darkest periods in Spain’s recent history. Both republics worked together to welcome as many Spanish refugees or exiles as possible, including leading international figures from the world of economics, medicine, science, arts, culture and science, and renowned artists.

Relations were broken with the arrival of the dictatorship and it has just been 40 years since relations between Spain and Mexico were re-established after the Franco regime, and we believe that, in view of the situation that Europe is currently experiencing with the refugee crisis, we are given the opportunity to analyse, review and reflect on the common history of these two countries, and ultimately of Europe and Latin America, in order not to forget the past, and to remember the lessons it offers us for the present and for the future.

Experts and academics meet to analyse the Spanish exile in Mexico 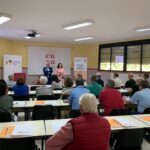