The Entrepreneur Program finalizes its academic part, conducted at the European Academy of Yuste Foundation 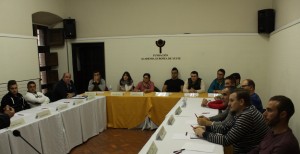 The theoretical classes of the Entrepreneur Program for tobacco growers which have been conducted at the European Academy of Yuste Foundation since December come to an end tomorrow, Thursday 3 March.

The eighteen professional tobacco growers who have attended the two hundred hours of lessons are from the regions of Campo del Arañuelo, La Vera and Sierra de Gata and have a common desire to improve their capacity to manage their farms with innovative tools from the business world.

During the academic part they have received training from professors from different Spanish universities, as well as specialists and experts in entrepreneurship and innovation. Under the direction of a group of mentors, the students will also have to design group company projects with which they will highlight what they have learnt during the course and which will be exhibited before their mentors and the members of the jury in order to select the two most comprehensive and viable ones. Upon completion of the educational program, the growers taking part who pass the evaluation will receive the official qualification of University Expert issued by the University of Extremadura.

The entrepreneurship program began as a way of meeting the needs of the tobacco farmers and the agricultural cooperatives which, in recent years, have had to undergo a profound transformation process to ensure the continuity of their business, following the reduction in aid from the European Union.
The sixth Entrepreneur Program for Tobacco Growers is a training program for leadership and entrepreneurship promoted by Philip Morris Spain in partnership with the University of Extremadura, with the help of the academic direction of professors Mari Cruz Sánchez Escobedo and Ricardo Hernández Mogollón and the support of the Foundation, where the academic part has been conducted from the outset.

The course was opened in December at the Institute of Modern Languages of the University of Extremadura with the attendance of Carmen García González, Vice-Dean of the Digital University of the University of Extremadura, Ainhoa Capdevila, Manager of Communication and CSR of Philip Morris Spain, Rosa Balas, General Manager of External Action and President of the Executive Committee of the Foundation and Begoña García Bernal, Minister of the Environment and Rural Affairs, Agricultural Policies and Territory of the Government of Extremadura, who reiterated the commitment of the Government of Extremadura to the tobacco sector industry, to which she offered “support and backing” to seek solutions within the European context to enable sustainability.

After five years, this initiative has begun to show signs of enabling the growers in the region to gradually become a driving force of change in the sector, which is undergoing a complete transformation. An example of this is the tobacco drying centre located in Santa María de las Lomas, set up by Conrado Antón, a former student, which currently employs thirty people and dries a volume of one thousand tons each year.