Collaboration in the V Conference on Security and Defence: geopolitics in the Ibero-American realm, organised by the Ministry of Defence of the Spanish Government and the University of Extremadura.

With global vocation and its unique geo-strategic location, Spain’s National Security Strategy is engaged due to its European, Mediterranean and Atlantic condition. In fact, Spain’s Atlantic condition has enabled it to establish a close relationship with Latin America as a whole as well as with the diverse countries it comprises. The current international context opens opportunities of mutual cooperation which serve to strengthen the preferential relationship with Latin America; a relationship that goes beyond the traditional political, cultural and historical bonds to become a future projection and part of the strategic development of Spain’s Atlantic side, a relevant actor between Latin America and the EU.

In this sense, this region’s dynamism and the signing of trade agreements with Europe opens a new scenario with great potential. This goes along with the sociocultural component, a dimension that permanently situates Latin America among the main priorities of Spain’s strategical planning, including the field of cooperation policies.

For its part, there are still challenges regarding security in the region, such as Venezuela’s crisis situation in recent years, daily violence caused by organised crime and illicit trafficking in several countries of Central America. These conflicts are a menace to the stability of the region and to the security of more than a million Spanish citizens that live there.

In this way, the Defence and Security Conference, which fosters the collaboration of the Spanish Armed Forces through the Sub-delegation and the University of Extremadura as the main teaching and research entity of the Autonomous Community, take place. The main backbone objective is to foster this relationship in order to integrate society in the problems of Defence and Security.

Bearing in mind that Geopolitics analyses the history of societies in relation to the territory and the economical and racial factors that characterize them along with the effects on politics and the international relations, this conference is structured in three blocks of presentation and discussion: 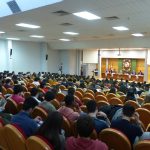