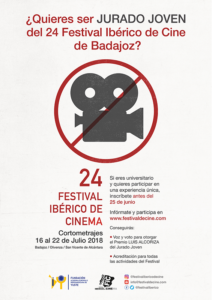 Young students between the ages of 18 and 30 from the University of Extremadura may participate in the selection to become a member of this jury, regardless of what they are studying. The deadline to become a member of this jury, which will once again have a voice and a vote and will be in charge of awarding the Luis Alcoriza Award of the Youth Jury, will end on 25 June.

The members of the Youth Jury will be duly accredited and they will have the right and obligation to attend all the official short-film sessions in the contest played at the López de Ayala Theatre from the 18th to the 21st of July.

Those interested in signing up must complete a form in the following website: http://festivaldecine.com/2018/inscripcion-jurado-joven/. The organisation of the Iberian Film Festival will carry out a cinematographic test on all those who registered by means of a short-film in order to guarantee the competence and suitability of the final jury chosen.

This Award, furthermore, pays tribute to Luis Alcoriza, director, scriptwriter and film actor who was born in Badajoz and exiled to Mexico after the civil war. Luis Alcoriza was one of the greatest figures in Mexican cinema. Collaborations with Luis Buñuel in eight film scripts stand out during his career where he wrote some of his best film scripts, such as “Los Olvidados” and “El ángel exterminador”.

Cinematographic Creation Workshop on the Peace Process in Colombia

Continuing with the intention to bring the cinematographic sphere close to young people and carry out an interesting educational activity related to the cinema, the European and Ibero-American Academy of Yuste Foundation organises a Cinematographic Creation Workshop for the Youth, in collaboration with the Iberian Film Festival of Badajoz.

The workshop is addressed to young people of ages ranging from 14 to 17 and will be carried out form the 16th to the 20th of July, coinciding with the celebration of the 24th Iberian Film Festival.

Having a duration of 25 hours, this workshop employs an eminently practical methodology. The students will carry out an audio-visual presentation and in doing so will learn about the aspects related to language, audio-visual narration, the handling of cameras, sound pickup and outdoor or set recording. The students in this workshop may, furthermore, complete their training having free assistance to the rest of the Iberian Film Festival activities.

This year the subject will be the peace process in Colombia and it is in this manner that the cinema becomes an educational tool, using the power of the image to enable young people to assimilate contents and learn to tell stories.

The deadline for registering is open until 10 July and those interested may complete their application vial mail at: info@festivaldecine.com