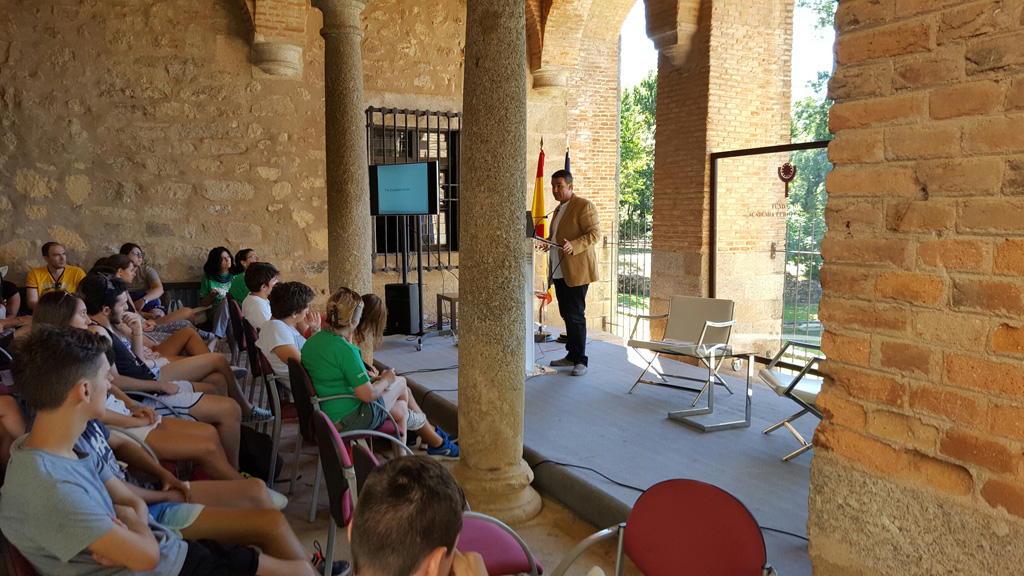 The event on 5th August was organised by the European Academy of Yuste Foundation and Cáceres Rotary Club, EBS Business School, and the Organización Juventud Nueva (New Youth Organisation). It was held at the Royal Monastery of Yuste, the Foundation’s headquarters, and examined social leadership, the process of European integration, and the challenges facing Europe.

Miguel Ángel Martín Ramos, Head of European Affairs and Brussels Delegate, talked to young people about European construction and integration, how European institutions work, and the main threats and challenges facing Europe today. Young people from Portugal, Italy, Georgia, and Spain, showed a keen interest in the talk. There was an energetic discussion on how the European Union works, its history, and especially the impact the threats facing Europe today could have on their future: the UK’s exit from the EU, the economic crisis, the refugee crisis and management of immigration, terrorism, energy issues, the ageing population, and above all the lack of leaders with a pro-EU stance. Later, after a debate lasting almost three hours, participants visited the Royal Monastery of Yuste and Carlos V Palace: a visit organised in conjunction with National Heritage.

The group of young people were taking part in Y.U.S.T.E. International Summer Camp  (Youth Up, Sharing Talent for Europe) programme, and had been selected through the ‘Concurso Protagonistas del Mañana’ (Tomorrow’s Leaders Competition) organised by Cáceres and Mérida Rotary Clubs in collaboration with the Regional Government of Extremadura’s Education and Employment Ministry, the European Academy of Yuste Foundation, and other similar organisations from Italy, Portugal, and Georgia, under the Erasmus + programme.  The project aims to give recognition to young people with social leadership qualities who show commitment to the programme, giving them the opportunity to meet like-minded individuals from other European countries, receive enriching training, and widen their view of Europe. Young people and organisations who participated in the 2015 Summer Camp all contributed to outline three concrete aims of the project:

1) Develop collaborative leadership skills in young people to help in their professional future, such as: working in teams, decision-making initiatives, social leadership, and multilingualism.
2) Promote recreational and cultural activities to encourage healthy behaviours, and
3) Educate participants on the role young people need to play in European construction, encouraging them to participate more actively than they have in the past.

By supporting this activity, the Foundation hopes to play a key role in promoting youth participation in European matters, raising awareness of their pivotal role in the construction of Europe in the future. In this vein, the 2015 Summer Camp organised an informal talk between young participants and the then Director of Spain’s Office of Representation in the European Parliament, Ignacio Samper, who talked about the opportunities available to young people to take part in the construction of Europe, as well as clearing up doubts about European activities and sharing his professional experience from thirty years working in Parliament.

For more information go to www.youth4europe.org, which also includes information on 2015 and 2016 Summer Camp activitiesand the organisations taking part in the project.