A CONFERENCE ANALYSES GEOPOLITICS IN THE IBERO-AMERICAN REALM IN CÁCERES 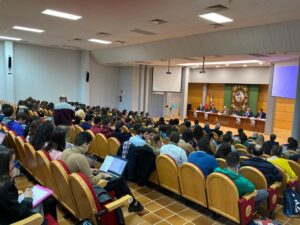 The Faculty of Law in Cáceres hosted the opening session of the V Conference on Security and Defence “Geopolitics in the Ibero-American Realm” on Tuesday, which is organised by the Ministry of Defence and the research group ‘Extremadura and America’, along with the collaboration of the European and Ibero-American Academy of Yuste Foundation.

In her speech, the Director-General for External Action, Rosa Balas, stressed that a moment like the current one, where multilateralism is not a priority for some countries, must lead Europe to maintain a key and strategic alliance with Latin America.

The event was also attended by the Director of the European and Ibero-American Academy of Yuste Foundation, Juan Carlos Moreno; the Deputy Dean of the Faculty of Law, Jesús Conde; the coordinator of the conference, Sixto Sánchez, Lauro; the delegate of Defence in Extremadura, Jesús Antonio Caballero Calzada, and the Vice-rector of University Extension, Juan Carlos Iglesias.

Rosa Balas also stressed that, in this new period that the European Commission has just begun, the relationship with Latin America must be key, as the EU High Commissioner, Josep Borrell, has pointed out.

“It is a unique opportunity to have spaces like this conference dedicated to such important topics in the current international juncture as Ibero-America may be and these subjects are especially important to Extremadura as Europe and Latin America are its two priority axes”.

The Director of the European and Ibero-American Academy of Yuste Foundation, Juan Carlos Moreno, focused his speech on loyalties.

In these “loyalties and affections”, he incardinated the need for Yuste Foundation to collaborate with “vital institutions” of the State, such as the Armed Forces and the State Security Forces and Bodies, because “in the defence of the values that have made Spain a great nation, no one is left to spare, and those of us who resolutely want to be involved in the struggle for the defence of the constitutional principles of freedom, justice, equality and political pluralism must be associated”.

Along these lines, Moreno has emphasized that “we must maintain the same attitude when we project this solidarity to the fraternal countries of Latin America”, coinciding with the vision that inspires Yuste Foundation to be an instrument between Europe and Latin America, with which Spain and especially Extremadura “are so closely linked by many bridges, from the historical to the affective, the economic or that of safety”.

After this event, the representative of the Division of Coordination and Studies of Security and Defense (SEGENPOL), Ramon Liaño Núñez, was in charge of offering the Key-note address: “Geopolitical Dynamics in Ibero-America”.

In addition, a round table on “Violence and criminality in Ibero-America: a national security issue”, moderated by Colonel Enrique Martín of the Sub-delegation of Defence, was held as part of the activities of the conference.

Silvia Soriano of the UEX, Lieutenant Colonel Andrés González of the Spanish Institute of Strategic Studies, and Sonia Alda of the Real Instituto Elcano have also participated in this forum.

The conference will continue tomorrow, Wednesday, at the headquarters of the Sub-delegation of Defence in Cáceres, with a round table on Ibero-America in its historical projection and another on the conflicts in the Latin American realm.