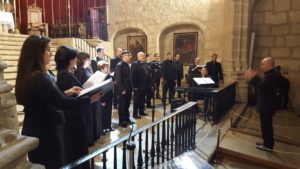 The choir sang In saecula saeculorum, a tonal music contemporary programme with soft and brilliant stresses that included works of their Amadeus Coral Composition International Contest. This contest has, not in vain, managed to project Extremaduran culture and music mainly to the rest of the country, Europe and Ibero-America. This is the same programme that the choir has elaborated to commemorate the 20th anniversary of its foundation. It includes Latin texts on Christian tradition, poems translated from English to Latin, along with other writings that were originally written in English, French, in the evocative castúo spoken by Gabriel y Galán and popular and strong Castilian spoken by F. G. Lorca in his conclusion. As a final touch to this sample of European linguistic, literary and musical diversity, a version ad hoc of the European Union’s official anthem, Beethoven’s Ode to Joy, based on F. Schiller’s homonymous poem, will be included out of the programme. The choir enjoyed the collaboration of the pianists from Montijo, José Luis Pérez Romero and Alberto Pérez García, and the sopranos Gloria Pérez Jaramillo and María del Mar Machado Morán. The choir is conducted by its principal and founder, Alonso Gómez Gallego. 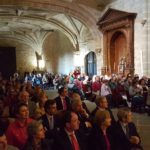 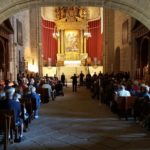 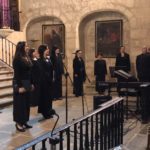