ZARABANDA. MUSIC OF THE TIME OF CARLOS V AND PHILIP II 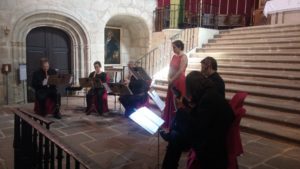 The reign of both old Habsburgs, Charles V and Philip II, which almost covers the whole 16th century, coincides with an awakening of creativity in Spain included in all the arts and in all musical genres: sacred vocal and secular polyphony (Victoria, Lobo, Morales, Juan Vázquez), keyboard music (Cabezón), viola da gamba (Diego Ortiz) and particularly vihuela music (Narváez, Mudarra, Pisador, Valderrábano, Milán), where Spanish masters became well known. In this programme, Álvaro Marías and his group Zarabanda, with the voice of Sandra Redondo, stress some milestones of this flourishing period, taking the arrival of Charles in Spain five centuries ago as the starting point. Honouring the title of the programme, the song Mille regretz (sometimes written “regrets”) of the Franco-Flemish master Josquin des Prez, which became very popular in the Europe of the time, will be played. “A thousand regrets for abandoning you and leaving your loving face”, sings Josquin, the patriarch of Renaissance polyphony. “I have such great sorrow and pain that soon my days will be seen to be numbered”. Innumerable copies and versions were made of this song (it inspired Cristóbal de Morales when he composed one of his most famous masses) and it was César Carlos’ favourite. This was so to such an extent that the vihuela player Luis de Narváez called his magnificent transcription “the Emperor’s song”.