The president of the European Commission, José Manuel Durão Barroso, received the Carlos V European Award 2014, given by the European Academy of Yuste Foundation, at a ceremony held on 16th January 2014 at the Royal Monastery of Yuste (Caceres, Extremadura), which was presided over by His Royal Highness, the Prince of Asturias. The Jury of the ‘Charles V European Award’ decided to reward José Manuel Durão Barroso (Lisbon, 23rd March, 1956), President of the European Commission, for his career, his commitment to the European unification policy, his work in the interest of citizen participation in the process of European integration, and his commitment to bringing Europe closer to its citizens, seeking always the common good above individual interests.

The president of the European Commission, José Manuel Durão Barroso, received the Charles V European Award 2014 from His Royal Highness, The Prince of Asturias at a ceremony which took place on 16 January 2014 at the Royal Monastery of Yuste (Caceres, Extremadura), headquarters of the European Academy of Yuste Foundation, the institution which presents this European award.

Numerous leading international figures attending, among these were the President of Spain, Mariano Rajoy who was charged with delivering a tribute to the recipient; the Prime Minister of the Republic of Portugal, Pedro Passos Coelho; the Minister of Foreign Affairs and Cooperation, José Manuel García-Margallo, and the president of the Regional Government of Extremadura, José Antonio Monago Terraza.

The jury decided to reward the work of Durão Barroso “for his track record, and his commitment within the sphere of European unification policy, his work in favour of citizen participation in the European integration process, and his commitment to bringing Europe closer to its citizens, always placing the general interests of the people above those of the individual”. They also highlighted his support of a stronger Europe at an international level “where not just economic, financial and political interests are taken into account, but also those that most concern the citizens and where culture plays an essential role in the process of European construction and the future of the old
continent”. The jury, in addition, noted the recipient’s commitment “in representing European general interests during a turbulent period of economic, political and social crisis, pushing even more for the European Union to be considered the only real solution common to all in order to resolve the biggest challenges being faced with a strengthened model of citizen integration so that the European Union continues to be an example of peace, democracy and prosperity to the rest of the world”.

It is worth noting that almost 100 communications media professionals of different nationalities covered the Charles V European Award ceremony, in which Telefónica and La Caixa participated as sponsors and Correos as partner. Millennium BCP, Vegenat, Organic and Café Delta also collaborated in this event. 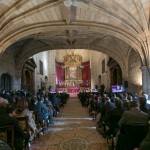