Sofia Corradi received the Carlos V European Award 2016, given by the European Academy of Yuste Foundation, at a ceremony held on 9th May 2016 at the Royal Monastery of Yuste (Caceres, Extremadura), presided over by His Majesty the King of Spain. With this award, the jury wishes to recognize “her career and, above all, her great commitment and contribution to the process of European integration by means of the design and implementation of the ERASMUS initiative of the European Union, as well as her work and endeavour on behalf of academic mobility, focussing on young European students as a guarantee of tomorrow and the future of Europe”.

The Italian professor Sofia Corradi has been awarded the Carlos V European Award by the European Academy of Yuste Foundation. This took place in a solemn ceremony presided by Felipe VI, attending for the first time as King of Spain, before various national and European authorities who wished to endorse their support and recognition to Sofia Corradi, driver of the Erasmus programme. The award coincides with the celebration of Europe Day.

In his speech, Felipe VI had an emotional thought for the families of the thirteen young Erasmus students who recently died in a traffic accident in Tarragona. The King recognized the Erasmus programme as “a social and emotional network, twinning supranational affections, which builds Europe from the base, from its most genuine values”.

Moreover, he urged unity of European citizens and the values we share in the current situation of the European Union, because now more than ever, “commitment, determination and responsibility are needed, all values on which the Union is founded and that inspire our coexistence in democracy: freedom, human rights and solidarity”. The King appealed to the contribution of new generations for the “Union to always maintain and affirm those values”, because “Europe is stronger than all the uncertainties stalking the world today”.

The ceremony was attended by an Erasmus delegation of the countries of the European Union, with a majority representation of Erasmus student from the University of Barcelona, as a tribute to the deceased Erasmus girls.

During the ceremony, the President of Extremadura, Guillermo Fernández Vara, spoke. He stressed that the Foundation was created to be “a symbol of unity and projection into a territory where the greatest border is the commitment to make progress in culture, in reflection, in citizenship, where solidarity among peoples and individuals is the greater reality”. The President of the Extremadura Government emphasized the value of youth in society because “they are the link we have with our future”. In this regard, he added that the Erasmus + programme is an “integrating project”, that not only affects millions of students, but has a “multiplier and inclusive effect, expanding knowledge, spreading autonomy and opening borders”.

Meanwhile, Sofia Corradi said during her speech that “the Erasmus programme is not only a privilege for a few, but an opportunity for many”, and added that “the most prominent feature of Erasmus is the life experience, the experience of a full immersion in a different culture”. According to the award-winner, the Erasmus experience “includes the ability to communicate, to cooperate in a team and to solve unexpected problems through innovative solutions”. Sofia Corradi explained that in devising the Erasmus programme, she began her “personal campaign for peace” as it was conceived in 1969, during the Cold War. She also encouraged Spanish institutions to encourage their Latin American counterparts to share future projects.

The President of the European Parliament, Martin Schulz, also participated in the event. In his speech, he praised the Carlos V European Award because “it honours men and women for their outstanding merits in favour of the European idea”, exemplifying the figure of Sofia Corradi for his defence of the European project. Schulz highlighted the role of Spain as being the country of the European Union which had sent and received more Erasmus students, and also “one of the most pro-European countries in the Union”. Finally, he stressed the importance of personal relationships at present “when the centrifugal forces of the crisis threaten to separate us”.

The Carlos V European Award has the institutional support of the European Parliament, it is sponsored by the Ministry of Education, University and Research of the Italian Government, and it is supported by the collaborating institutions Caja Rural de Extremadura and Extremadura Avante.

Over 20 regional, national and international media were accredited today, in addition to blogs on today’s European politics.
The Amadeus-In choir from Puebla de la Calzada (Badajoz) has enlivened the closing ceremony with the hymn of Europe. 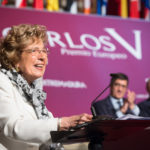 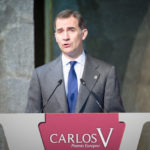 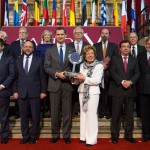