Felipe González, Javier Solana and Marcelino Oreja Analyse the Future of Europe in a Webinar Organised by Yuste Foundation 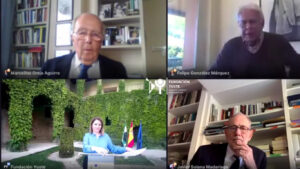 The three Spanish winners of the Carlos V European Award granted by Yuste Foundation, Felipe González, Javier Solana and Marcelino Oreja, participated in the webinar “Quo Vadis, Europa? in the Post-Covid Era” in order to analyse the current situation which Europe finds itself in and to reflect on the challenges it faces, especially bearing in mind that the Conference on the Future of Europe will be launched on 9 May, coinciding with Europe Day. (07/05/2021)

The president of the Regional Government of Extremadura, Guillermo Fernández Vara, participated by means of a video in which he defended “integration in these times of identities, of hypernationalism and borders”. In his view, Europe is the consequence of a firm will on the part of a generation of political and public leaders “who chose to build the future together”. In this sense, he added that “people who do not know where they come from end up not knowing where they are going very well” and claimed the need to value and keep in mind “where we come from, what loneliness means, and what cooperation and collaboration in a European context represents”. He finally affirmed that Yuste Foundation will continue to do its share to continue in this line from the Royal Monastery of Yuste and from Guadalupe.

For her part, the Director-General of External Action of the Regional Government of Extremadura and President of the Executive Committee of Yuste Foundation, Rosa Balas Torres, who moderated the webinar, reaffirmed the role of Yuste Foundation as “a space for debate, for calm reflection and for the deep analysis of the society around us”.

Balas also referred to the Conference on the Future of Europe, a space that will address the economic and social crisis, climate change, populism, fake news and the migration crisis, “and a global pandemic that has shaken the economic, health and social structures has been added to all this”. The Director-General added that in this new and unexpected reality, the Conference may suppose “a change of era that must translate into a greener, more sustainable and more digital revolution; but in turn, Europe must continue to defend its values and its essence, a more social and cohesive Europe”.

When it was time for the panelists to participate, Marcelino Oreja Aguirre, winner of the 2017 Carlos V European Award, claimed that in his opinion the focus of the Conference on the Future of Europe should be on “the implementation of the policies that citizens need and obtaining results: vaccines, employment, economic recovery, digital and ecological transition”. In his opinion, “it is time to act and implement active policies that demonstrate the presence and value of joint action because there are many challenges that must unite us, since there is no union without solidarity and common values”.

Regarding challenges, Oreja Aguirre highlighted the economic recovery plan as the most necessary and important one for the money to reach the business fabric and citizens as soon as possible. “It must be ensured that the EUR 750 thousand million of the recovery fund is used effectively, without excessive bureaucracy but also without corrupt practices, and citizens will judge the results.”

Former President of the Spanish Government, Felipe González Márquez, winner of the 2000 Carlos V European Award, said that Europe is built on the basis of “a shared public space” during his speech, which in his opinion is the foundation of Europe. “Each Member State cedes part of its sovereignty not for others to administer, but to share it with them. Therefore, one does not lose sovereignty, what one does is to share sovereignty, which is the basic requirement to build a shared public space. That is how Europe was built.”

González highlighted the positive and transcendental behaviour of the European Union in the face of the current crisis, “a behaviour that has been diametrically opposed in crises suffered in the area between 2009 and 2012”. He said that Europe’s reaction against the crisis with active policies and a clear orientation in reconstruction projects “is a reaction that defines a new strategy of Europe, a new European expectation”; adding that “the reconstruction effort belongs to everyone and must be inclusive”, and he recalled that “Europe must reflect on its great invention which is the social market economy, the social base, social cohesion”.

Javier Solana Madariaga, 2011 Carlos V European Award, highlighted the important role that Europe can play in issues related to artificial intelligence and global health. He stressed that the Conference on the Future of Europe should result in “science, research and scientists being a very important part of European development”. In his view, “Europe must touch the sky with knowledge, wisdom and well-being for all; that is, to do everything possible to make this become a reality”.

For Javier Solana, the solutions to the current situation are to “to put all the capabilities that the European Union can have at the disposal of its citizens and at the disposal of peace and world concord, because we are a model for many people; the way Europe acts and thinks is very attractive to many world citizens and we need to do better”, stressing that we need to “think in order to act”.

Finally, Solana expressed his desire to live in a “strong, legitimate, properly funded Europe and that we be optimistic “.