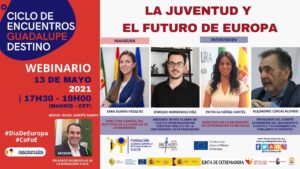 Yuste Foundation is organising the webinar “Youth and the Future of Europe” which will take place on 13 May at 5.30 p.m., with the aim of discussing key issues to define how to improve European youth policy and encourage active participation of young people in the process of European construction. The meeting is part of Yuste Foundation’s Cycle of Meetings called “Guadalupe as a Destiny”, which is organised on the occasion of the Holy Year of Guadalupe 2021, and is also held around the commemoration of Europe Day. It also aims to contribute to the Conference on the Future of Europe. (04/05/2021)

The event will cover Spain’s participation in the European Union, paying particular attention to the role played by young people and the opportunities Europe offers them in terms of training programmes, labour mobility and channels for youth political participation, from Spain and Europe towards global governance in the framework of the 2027 Strategy and the SDGs. The panellists will analyse the current pandemic situation and detail how young people can get involved in shaping Europe’s future through the Conference on the Future of Europe. It will also explain the work being done by the regions and the regional representation offices in Brussels on youth policy and the topicality of the dossiers currently being dealt with on youth at European level.

To address all these issues, the webinar is attended by the President of the Extremaduran Council of the European Movement and MEP between 1999 and 2014, Alejandro Cercas; the Director of the Delegation of Extremadura in Brussels, Patricia Núñez Cortés; and the member of the Yuste Alumni Network and researcher in Public Law at the University of Extremadura, Enrique Hernández Díez. The meeting will be opened by the Director-General of the Youth Institute of Extremadura, Sara Durán Vázquez.

Those interested can register free of charge, to follow and participate with their questions via the following link: https://app.livestorm.co/fundacion-yuste/webinar-la-juventud-y-el-futuro-de-europa?type=detailed

The webinar can also be followed live through Yuste Foundation’s YouTube channel as well as its website: https://www.fundacionyuste.org

Cycle of Meetings “Guadalupe as a Destiny”. Holy Year of Guadalupe

The main objective of these events is to promote and energise local culture and tourism, through the recovery, valuation and dissemination of cultural heritage, the promotion of religious initiatives as a way of pilgrimage and the strengthening of ties with Ibero-America.

Conference on the Future of Europe

The Conference on the Future of Europe is a series of citizen-led debates and discussions that will enable people across Europe to share their ideas and contribute to shaping our common future.

This is the first conference of its kind: it is a major pan-European democratic exercise that offers a new public forum for an open, inclusive and transparent debate with citizens around a number of key priorities and challenges.

All activities can be followed through a multilingual digital platform where EU citizens are invited to contribute to shaping their own and Europe-wide future. The platform, which is available in 24 languages, will allow any citizen of the Union to disseminate and exchange ideas and views at online events.

Europe Day celebrates the peace and unity of the continent every May 9. The date is the anniversary of Schuman’s historic declaration. In a speech in Paris in 1950, the French Minister for Foreign Affairs, Robert Schuman, put forward the idea developed in cooperation with Jean Monnet of a new form of political cooperation that would make a war conflict between European nations unthinkable. That idea was that of a European institution to pool and manage coal and steel production. Just a year later, the Treaty establishing the European Coal and Steel Community, which set that institution in motion, was signed. Robert Schuman and Jean Monnet’s proposal is seen as the beginning of what the Union is today.