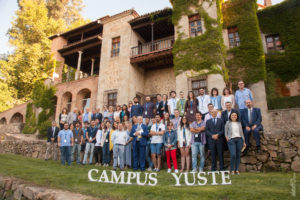 To analyse the binomial war-peace at both sides of the Atlantic during the reign of Charles V; this is the reason why international academicians and experts meet from today until 6 July, in Yuste, in order to carry out the course “Charles V: War and Peace on Both Sides of the Atlantic”. Organised by the European and Ibero-American Academy of Yuste Foundation and the Cooperation Network of European Routes of Emperor Charles V of the Council of Europe in collaboration with the Regional Government of Extremadura, this course will also attempt to study the perception that the actors of those conflicts had and the consequences they caused in the politics of the time.

The head of the Foundation stressed the exceptionality and privilege of being able to hold this course “because it is organised at his home”, where the Emperor spent the last nineteen months of his life, from 3 February 1557 to 25 September 1558.

He encouraged the students to “learn but also to enjoy, because you can only learn if you enjoy”. The manager of the Cooperation Network of European Routes of Emperor Charles V, Quintín Correas, pointed out that this course is part of the activities carried out by the Network. A Network that is made up by 84 partners from 11 countries; not only European, but also African and American with the incorporation of Panama.

He, furthermore, recalled one of the most important milestones for the Network when it was declared European Cultural Route by the Council of Europe. In this sense, Correas wanted to highlight the significant work that the cultural routes have “as a structuring element of European identity, as an instrument of intercultural dialogue development and cooperation among the different European and American territories”.

The co-director of the course, Rosa María Martínez de Codes, indicated that they designed a programme of the course on Charles V that attempts to review the image that the students may have of him, creating a deep vision from the analyses made by the speakers of different nationalities, as well as from what Charles V means in 16th century Europe and America.

Martínez de Codes explained that the connection Europe-America had been seeked due to the Foundation’s double nature, but also because Spain has been strengthening this bond for centuries “being a magical link in this bridge of connections that has been created throughout centuries and is not insignificant”.

The co-director of the course stated that “we are in the 21st century and we need to understand the past from the standpoint of the present, and many aspects of that past allow us to become acquainted with European identity, our identity”. We, furthermore, “continue being from that other side, from that double identity that unites us to what is American because there have been many years of coexistence”, she added.

The course is divided into 3 great blocks, where the talks and roundtables are included. In the first one, entitled “War and Peace in the European Framework”, the concepts of power, sovereignty, territory and religion in the Europe of Charles V will be analysed, paying especial attention to the conflict with other kingdoms and the Turkish-Ottoman Empire; the crisis in the Netherlands; the war with France; the control of Naples or the fight for the dominion of the Mare Nostrum.

The second block has been entitled “Violence and Peace in the Conquest of New Lands on the Other Side of the Atlantic”, where the issue of “just war” will be explored as well as peace in the borders; the conflict with the communities of Castille; the principle of vim vi repellere licet in overseas conquests; the vision of those defeated from a contemporary point of view, and there will be debates on the concepts of conquest, discovery or colonisation before the uncertainty of the unknown.

Lastly, the third block will tackle Renaissance Humanism in the face of war and peace on both sides of the Atlantic, supported by literature, art or theology and analysing the difficulties in the conquest and evangelisation of the New World; the problem of “just war” in the work of Francisco de Vitoria and Domingo de Soto; Erasmus, Vives and Agrippa von Nettesheim’s texts or the war seen through the arts and the humanistic concept of the battle’s beauty.

Thirty five students from Spain, Mexico, Russia and Colombia, from the universities: Autonomous of Madrid, Granada, Burgos, País Vasco, Complutense of Madrid, Sevilla, Extremadura, Carlos III, Valladolid and Jaén, participate in the course, included in the training programme Yuste Campus and within the framework of the 19th edition of the International Summer Courses organised by the University of Extremadura.

The course is directed by César Chaparro, the Academic Director of the European and Ibero-American Academy of Yuste Foundation and Professor of Latin Philology at the University of Extremadura and Rosa María Martínez de Codes, Professor of American History at the Complutense University of Madrid.