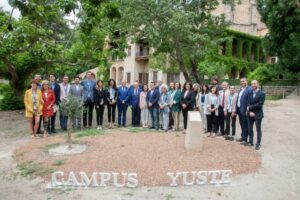 Marcelino Oreja, academic of Yuste and awardee of the Carlos V European Award, claimed last Wednesday in Yuste a “united Europe with a social and protective scope that develops policies such as the fight against climate change, the adaptation of the regulatory framework to the digital society or the control of external borders”, with the aim of building open and cohesive societies.

This was stated in the inaugural speech given at the Carlos V-Marcelino Oreja European Award doctoral seminar entitled ‘The modernisation and governance of the European project in a plural framework with shared values and objectives’, organised by the European and Ibero-American Academy of Yuste Foundation, which will run until next Friday at the Royal Monastery of Yuste.

In Marcelino Oreja’s opinion, it is very positive that European decisions and their influence, both at the national level and in the other member countries, are increasingly present in public life. In his view, the solution to the European Union’s problems lies in a “Europe with political initiative” and in having a European Parliament strengthened by an ever-wider vote.

In this regard, he stated that “the European Union must show its citizens that it can protect them and create more opportunities than the nationalist trends and a closed economy”.

In addition to achieving an ever greater participation, Yuste’s academic believes that the new Parliament must commit itself to defending at all costs the “democratic values” that are at its origin.

Marcelino Oreja recalled how in 1986, the UCD government, led by Adolfo Suárez, of which he was a member, requested with the backing of all political forces the opening of negotiations with community institutions, and how from that moment on Spain has been an “active member, open to dialogue, negotiation and agreements, respectful of citizens’ rights and liberties”.

The winner of the Carlos V European Award in 2017 believes that Europe’s problems will only be solved by proposing models of virtuous people to the young people, with habits of “courage, justice, prudence and generosity”; he also called for unity by transmitting a culture of values that opposes “postmodern relativism and opportunistic possibilities”, encouraging everyone to dream of a better world based on “people’s ethical behaviour, on the discovery of the true path in search of a common horizon”.

He ended by recalling a quote from the book ‘A Return to Europe’, by the then Cardinal Ratzinger, which manifests the idea that Europe was launched after World War II to reject nationalist heresy, but “he also tells us with clear premonition that the danger of nationalism is not overcome”.

The opening of the doctoral seminar was given by José María Hernández, Mayor of Cuacos de Yuste; Jürgen Elvert, German professor and Director of the seminar; Jean Monnet, Chair of European History at the University of Cologne; and Juan Carlos Moreno, Director of the Yuste Foundation.

Ten doctoral students from Italy, the United Kingdom and Spain will present their work at the doctoral seminar ‘Carlos V-Marcelino Oreja European Award’. For three days they will present their research on European challenges; the risks of European democracy; the problems of borders and the protection of fundamental rights; the externalisation of the European Union’s migration and border policies; migrants; the banking union and the crisis in EU criminal law.

The scholarships are related to the figure of the winner of the Carlos V European Award and, in this way, the research topic is adapted to the curriculum of the winner. The call for scholarships is addressed to researchers from all over Europe, who are preparing a doctoral thesis in any of the different disciplines of the human and social sciences.

Researchers participate in the Carlos V European Award Doctoral Seminar and their work is published by the prestigious scientific publishing house Peter Lang. All of them become part of the Yuste Alumni Network, made up of scholarship students in all editions, many of whom currently occupy relevant roles in the most important European institutions or universities.

The aim of the Network is to exchange knowledge so that researchers can work together and study specific issues affecting the future of Europe and seek possible solutions to the problems it faces. Nearly one hundred researchers from different countries such as Germany, Belgium, Spain, France, Russia, Portugal, Mexico, Peru, Cuba and Brazil, belonging to disciplines such as Sociology, Economics, Politics, History, Communication and Law, among others, have benefited from these scholarships.