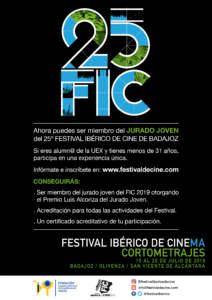 The European and Ibero-American Academy of Yuste Foundation and the Iberian Film Festival of Badajoz invite university students to form part of the Young Jury of the 25th Iberian Film Festival, in charge of awarding the Luis Alcoriza Award in this festival, which will be held in Badajoz.

Students from the University of Extremadura with ages ranging between 18 and 30 can participate in the selection, the registration period ending on the 25th, regardless of what is being studied.

The Iberian Film Festival’s organisers will carry out a cinematographic analysis test of a short film to guarantee the competence and suitability of the jury chosen.

The members of the Young Jury will be able to participate in all the Festival’s activities and will obtain a certificate accrediting their status as Young Jury 2019 at the 25th Iberian Film Festival of Badajoz and will be obliged to attend all the official short film sessions in competition that will take place at the López de Ayala Theatre, between 16 and 19 July.

With this activity, the European and Ibero-American Academy of Yuste Foundation and the Iberian Film Festival of Badajoz promote the participation of university students in the audiovisual and cinematographic world.
By designating the Award of the Young Jury with the name Luis Alcoriza, tribute is paid to this director, scriptwriter and film actor born in Badajoz and exiled in Mexico after the civil war, becoming one of the greatest Mexican actors.

His career includes collaborations with Luis Buñuel in eight scripts, writing in some of his best films, including ‘Los olvidados’ and ‘El ángel exterminador’.

Continuing with this line of approaching the young people to the cinematographic field and carrying out an interesting training activity linked to the film industry, the European and Iberoamerican Academy of Yuste Foundation in collaboration with the Iberian Film Festival of Badajoz organise an Audiovisual Creation Workshop for Young People.

The workshop, aimed at young people aged between 14 and 17, will be held between 16 and 18 July, coinciding with the 25th Iberian Film Festival.

With a duration of 15 hours, this workshop has an eminently practical methodology; the students will create an audiovisual piece during which they will learn aspects related to audiovisual language and narrative, handling cameras, and sound capture, recording in indoors and outdoors.

In addition, in this workshop students will be able to complete their training with free attendance to all the activities of the Iberian Film Festival.

This makes audiovisual in general and cinema in particular, become an educating tool, using the power of the image for young people to assimilate contents and learn to tell stories.