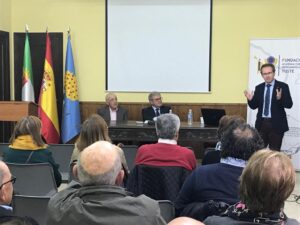 Aimed at spreading Europe and the values it promotes, democracy and peace, the European and Ibero-American Academy of Yuste Foundation, together with the association Placeat, the association Pedro de Trejo and the Concha Foundation, have organised two conferences entitled ‘The European Union: a long road to peace and coexistence’ which were given on 9 and 10 April in Plasencia and Navalmoral de la Mata.

Professor Vicente Álvarez, lecturer in Administrative Law at the University of Extremadura, took part in the Plasencia conference. He explained that the three great achievements of European integration are “to be able to live through the longest peace period in the history of Western Europe, democratic stability and extraordinary economic and social development”, achievements which, in his opinion, “have great lights, but also important shadows”.

In the final debate, Álvarez pointed out that the youth in Spain knows more about Europe than a few years ago, because it is easier and cheaper to travel to other countries and, above all, through the Erasmus programme, which enables “many university students to enter the faculty with the idea of doing a course in another country. He also added that “the fact that flights to many European cities are cheap also helps”.

Meanwhile, Alfonso Pinilla offered some reflections on the institutional organisation of the European Union, its competences and the relationship with the Member States, since, in his opinion, “we are faced with a political commitment unprecedented in history” such as the “creation of a supranational State based on the association of the existing Nation States”.

In the professor’s opinion, Europe is an “unfinished process” and no one knows where it will evolve to, it is “an uncertainty, a garden with many branched paths”.

Pinilla referred to the causes which, in his opinion, the Union is facing and which have to do with “the economic imbalances produced from 2008 onwards; the terrorist attacks committed in the different European countries; the wave of immigrants and refugees and the institutional earthquake unleashed by Brexit”. In this sense, he pointed out that in order to solve the problems we have to “bear the responsibility of defending European values, which are individual freedom, equality before the law, solidarity and supranationality”.

Both professors focused on the most relevant milestones in the history of European construction, starting with the Schuman Declaration of 9 May 1950; the first European communities during the 1950s; the incorporation of Spain into the European project in 1986; the signing of the Treaty on European Union in 1992 with the establishment of the concept of European citizenship, and the implementation of its current fundamental legal framework after the ratification of the Treaty of Lisbon in 2007.