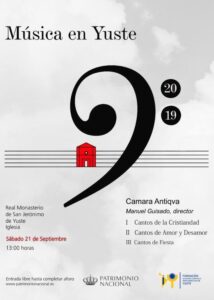 The Royal Monastery of Yuste’s Church hosts a performance carried out by the music group Camara Antiqva, directed by Manuel Guisado, on Saturday, at 13:00 pm. The concert is organised by the European and Ibero-American Academy of Yuste Foundation and National Heritage along with the European Routes of Emperor Charles V in order to commemorate the death of Charles V in Yuste. The entrance is free of charge and open to all public until seating capacity is reached.

The programme includes a selection of songs from the 15th until the 18th century, grouped into themes, such as love, religion, celebration and war feats by authors, such as Juan del Enzina, Mateo Flecha, Juan Vásquez, and Tomás Luis de Victoria, among others.

Camara Antiqva is a music group from Cáceres that was founded in 2015 and includes performers who have wide musical experience. Its repertoire focuses on one of the most important musical periods, to vocal music, of all times: the Renaissance. In many of its musical projects, Camara Antiqva includes musical instruments from the period, which are played by musicians and teachers from the Official Music Conservatory “Hermanos Berzosa” in Cáceres. Their participation in events, such as the Iberian Music Festival, in Badajoz; the Classical Theatre Festival, in Cáceres; the Miranda do Corvo Festival (Portugal) or their performance at the 12th Carlos V European Award ceremony at the Royal Monastery of Yuste, is worthy of mention.

Their Director, Manuel Guisado Rodrigo, is also a music teacher who has extensive training and experience in the field of polyphony. He founded the polyphonic group Discantus in 1986; a group that interprets Renaissance music, and directed it until 1996. He currently directs the Choir Arte Vocal, which has enabled him to win important national awards, such as the Gran Premio Nacional de Canto Coral (Choral Singing Grand National Prize) in 2009, which is the highest award a choir can be eligible for in Spain. At present he is the artistic director of the Choral Music National Contest in Villanueva de la Serena.