The call for grants for the course titled Religion in 21st-century Europe: challenges and proposals for confessional coexistence closed 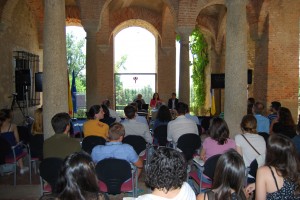 30 September was the deadline to apply for one of the 30 enrolment, board and lodging grants offered by the European Academy of Yuste Foundation for the last international course of the University of Extremadura which forms part of the Campus Yuste 2015 program, titled Religion in 21st-century Europe: challenges and proposals for confessional coexistence, to be held from 21 to 23 October at the Royal Monastery of Yuste. For those who wish to attend the course without a grant the enrolment period will remain open until the day before it begins and until it is full.

The grants are designed for students who are currently doing their university studies in official qualifications in any of the countries of the European Union. The grants are awarded upon the basis of the candidates’ academic performance.

The course will analyse the problems which have arisen as a result of the rise in religious fundamentalism and address the challenges faced by advanced societies due to the coexistence of religions. For three days it will discuss tolerance and respect as the pillars on which to build a society where all individuals and communities who assume the basic European values can feel at home and propose how to manage differences in a diverse society. The same subjects, highly relevant in Europe today, will also be covered on 1 and 2 October at the First Annual Symposium on Fundamental Rights in the EU, whose main topic will be Tolerance and respect: prevention and control of anti-Semitic and anti-Muslim hatred in Europe. The symposium will be held in Brussels, bringing together ministers from different countries, representatives of major NGOs and international institutions, members of parliament and renowned scholars and philosophers.

The academic part of the Campus Yuste course will be held in the mornings and a personal and professional training workshop will take place in the afternoons, aimed at increasing knowledge of public speaking, communication, leadership and teamwork. The course will have a prestigious panel of experts and scholars such as Esteban Ibarra, President of the Movement against Intolerance, as well as representatives of the different religions present in Spain, including the Catholic, Orthodox, Protestant, Islamic and Jewish faiths.

A preview of the program, access to the conditions for the call for grants and applications to  enrol on the course are available at www.fundacionyuste.org

The course is supported by OIDEL, an NGO with consultative status to the United Nations, UNESCO and the Council of Europe and its purpose is the protection of the right to education and freedom of education.

Campus Yuste is an event created by the European Academy of Yuste Foundation for its educational activities, based on encouraging debate and the reflection of students, researchers and professionals on European affairs.

Around three hundred participants have enrolled on the courses and the “Summer Camp” meeting of young people and attended over seventy talks, workshops and round table discussions conducted by about a hundred speakers.

The courses held in June and July together with the University of Extremadura and the Pontifical University of Salamanca covered a wide range of subjects, such as adaptation to the new labour markets from a European perspective, the Christian roots of Europe, the political facet of Emperor Charles V, the challenges for the European Union from the perspective of the geopolitics of energy, the debate on new European citizenship and the proposal for federalism as a possible form of organization for a more cohesive Europe.