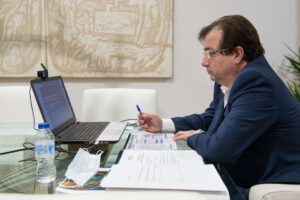 The President of the Regional Government of Extremadura, Guillermo Fernández Vara, presided over the online meeting of the European and Ibero-American Academy of Yuste Foundation’s Board of Trustees held today, where the activities planned for the coming year have been presented.

In this framework, the activities carried out during 2019 have been explained in detail, where 112 activities as opposed to the 82 during the previous year were carried out.

An increase in applications to be granted a scholarship in the Foundation’s Campus Yuste programme has also been assessed, where 759 applications from 47 universities located in 19 countries were received.

During the meeting, the Board of Trustees also presented the Activity Plan scheduled for the coming year 2021, which includes more than a hundred activities, where the increase of scholarships for students, which will exceed the 40 traditionally offered to 100 per course, is worthy of mention.

All activities will be virtual and freely accessible as well as face-to-face when health authorities allow.