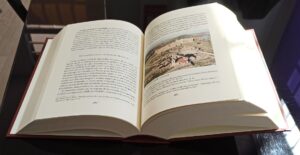 The European and Ibero-American Academy of Yuste Foundation presents the book Hernán Cortés en el siglo XXI. V centenario de la llegada de Cortés a México tomorrow in Medellin. It gathers all the conferences and presentations that took place in the Extremaduran localities of Medellín and Trujillo in April 2019 at the international congress that bears the same name. (02/06/2021)

The presentation, which will take place at 20:30 pm at the Quinto Cecilio Mételo Cultural Centre in Medellín, will count with the mayor of Medellín, Valentín Pozo, the director of Yuste Foundation, Juan Carlos Moreno, the president of the Federation Extremadura Histórica, José Ángel Calero Carretero; and the president of the Historical Association of Medellín, Tomás García Muñoz. PhD in American History, biographer of Hernán Cortés and teacher at “Carolina Coronado” secondary school in Almendralejo, Esteban Mira Caballos, will offer a lecture in which he will gloss the multifaceted personality of this character from Medellín.

This book delves into the historiographic knowledge of the figure of Hernán Cortés in the context of the 16th century, presenting and attempting to disseminate the historical transcendence of Cortés’ the polyhedral personality due to his background, youth, education and his colonisation, administration and expeditionary tasks. His concerns as a businessman and as a tireless fighter for the recognition of his legitimate rights are also studied. The objective is to get to know, understand, contextualise and disseminate the valuable historical, social, cultural and economic legacy that Hernán Cortés left Modernity.

Due to the security protocols implemented on the occasion of Covid-19, those interested in attending the presentation must make their reservation at the following link: https://docs.google.com/forms/d/e/1FAIpQLScBTttKmVNuUlFO_JuBd64oCRnoAzJV_WWBQtMV9tYOMFxdSA/viewform

For further information and in to purchase Yuste Foundation’s publications you may write to: libros@fundacionyuste.org